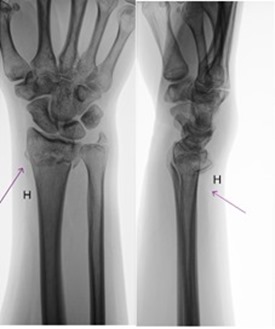 I disappeared from the internet, and all other forms of written communication for a few weeks, but now I’m back (hopefully for good). Here’s what happened:

I broke my wrist at the start of February (literally the first hour of February), giving my right wrist an extra bend (as you can see in the image). The doctors straightened that out (literally), and my arm was in a cast for five weeks. This was ok, with the upside being that the artwork friends and family members covered my lower right arm with, is about the closest my conservative, risk-averse skin will ever get to being tattooed. Downsides included being lopsided (heavier on  my right side, which made spins impossible), unusually tired (partially due to drugs) and greasy (washing my hair with my left hand was harder than I remembered.)

After working part-time most of the time my cast was on, I went back to work full-time less than a week after it came off. That turned out to be a mistake that resulted in pain and a full month of No Writing. Now I work three hours a day and do special exercises to strengthen my arm every day. And I can write again. In fact, I’m using blog posts and other non-work texts as physical exercise, in preparation for returning to work full-time.

This is the second time a wrist injury made me take an extended break from writing and the internet. I wrote a guest post on my friend Martine’s blog last time this happened: “Writing is an addiction I’m glad to have”

My name is Julie R. Andersen or Julie Ragnhild Andersen. I'm a communication geek, so this blog has posts about language, PR, journalism, literature, social media and partner dancing - plus coffee, of course. I work as a communication consultant with Burson-Marsteller in Oslo, Norway.
I blog both in English and in Norwegian.
On twitter, I'm @julierandersen

Tweets according to Julie